By: John Sidik and Noah Kleiner

“Click, Click, Click.” The sound of the gates shutting on my carabiners fills the brisk morning air  as I stand at the base of a steep wall of schist. It’s 8 a.m. on a Sunday, and no one else is around.

“Click, Click, Chirp.” A few songbirds join in as I finish hanging my quick draws from my harness  and begin to tie into the end of a dark-green-patterned climbing rope. The small town of  Camden, Maine, rests a few miles to the east.

The quiet peaceful scene unfolds as I start to climb – but not like in the climbing movies where  the guitar solo keys in as the camera zooms out to show the overhanging cliff above. Cut out the  crowds and the chaos, and this is what you’re left with. This is climbing in Maine.   – John

You can’t describe Maine’s rock climbing with one word. It’s unlike any other place you have ever  been. From the alpine granite of Katahdin to the small sport climbing crags and everywhere in  between, Maine has it all.

The most memorable experiences have been messing around in the woods with friends, trying  to find that hidden crag someone mentioned in passing; or the early morning sunrise over the  ocean as we climb on Otter Cliffs in Acadia National Park.

Living here has offered such a great chance to explore a vast state filled with climbing potential.  It’s been quite a ride getting to where we are, and even more exciting to share what we’ve found  along the way.

Alpine climbing doesn’t always come to mind when you think of Maine, but Katahdin offers  some of the best alpine routes in the country. The Armadillo and the Flatiron, two of the  mountain’s classics, are a must for any trad climber looking to explore here.

Getting above tree line and looking out over the rolling green hills of Northern Maine is second  to none. With no access other than by foot, the basins of Katahdin are some of the most remote  places to climb in the Northeast.

As anyone from New England will tell you, the weather can be atrocious in the mountains. You’ll  need plenty of experience, and even more warm layers, if you choose to tackle Katahdin. But,  with a little diligence and the right skill set, Katahdin’s alpine routes can bring adventures that  you’ll remember for years to come. 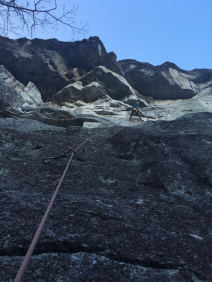 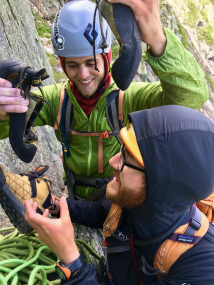 The sea cliffs of coastal Maine are an awe-inspiring sight, and even more of a thrill to climb. The  North Atlantic Ocean stretches for miles behind you as the cliffs of Acadia rise from the breaking  waves beneath your feet. From the steep routes of Otter Cliffs and Great Head to the pink  granite of The Precipice, Acadia has hundreds of quality routes. The island even holds routes  established and climbed by such professionals as Lynn Hill and Alex Honnold.

Miles upon miles of beautiful hiking trails and via ferrata style routes traverse the island, as well.

“It’s hard to describe such a place that makes you feel the exposure of the Atlantic Ocean and  the thrill of climbing!”   – Noah Bottom: Laura Mas Serra climbing at Great Head in Acadia National Park.

Camden, our hometown, has everything  from multi-pitch routes on Barrett’s  Cove Cliff and Ocean Lookout, to  rugged overhung sport climbing at the  Rampart, and technical-face climbing at  the Verticals. The climbing in Camden  has been established by locals with no  incentive but to reach the top and share  it with others. Hours and hours have  been spent unearthing and developing  the area’s bouldering. Endless miles  have been hiked (much of them in  circles) in search of new routes. Often,  bolt hangers were moved from one  route to another to save on budget, and  every once in a while you find yourself  leaving lower-offs at the anchors to  make things a little easier for the next  climber.

With dozens of cliffs, crags, and  boulders throughout the Camden Hills,  there’s never a dull moment. Go climb  the classics, or do as we do and set out  to explore. If one word were to describe  Camden, it would be adventure!

Left: Alexa Wagner explores in one of  Camden’s more hidden spots; a 20-foot deep chasm near the Rampart.

Maine is a big state; we’ve lived here most of  our lives and are still looking for the next  thing to climb. There are more climbing areas  than we have time to describe, all within a  day’s drive. Western Maine has Shagg Crag,  known for its challenging overhung sport  climbing. Bradbury State Park has its infamous  bouldering, and there are plenty of small  crags all over the state that have yet to be  found. So, pack your bags, grab your ropes  and come join us!

John and Noah run a small guiding service in Camden called Equinox Guiding Service.  Collectively, the company has climbed and skied all over the world, and continues to search for the  next place to share with its clients.

Time is money and we intend to save you both! We use affiliate links in our posts, which means that if you purchase something using one of our links, we get a referral bonus, at no additional cost to you  <3